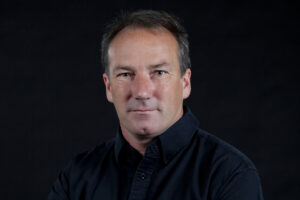 Martin Cooper was born in Liverpool in 1958 and studied at the Laird School of Art in Birkenhead. This was followed by three years at Sheffield College of Art where he obtained a first class honours degree in Fine Arts in 1980.

Between 1980 and 1989 Martin was a member of the highly acclaimed pop group Orchestral Manoeuvres in the Dark. As keyboard player and saxophonist Martin has toured with the band throughout Europe, the USA and the far east and as part of the band has achieved a number of chart successes both in the UK and internationally. Their album Architecture & Morality was one of the most successful albums of the 1980s. This album also included ‘Souvenir’, co-written by Martin, a single which reached No. 3 in the UK charts. It also reached No. 1 in France, Spain and Portugal.

In 1990 Martin, and two ex-members of OMD Paul Humphreys and Mal Holmes, formed the band The Listening Pool. Their album Still Life was released, under their own label Telegraph Records, to critical acclaim in 1993. The album cover featured a still life by Martin.

Aside from music, Martin has devoted most of his time and energy to his painting. Many of his works are still life pictures, usually in oils, which are acutely observed and convey a great sense of harmony and tranquillity.

Martin has exhibited widely, both in the UK and overseas, and his pictures hang in many private collections. Highlights include being shown at The Royal Academy of Arts (London), David Messum’s (London), The Williamson Art Gallery, (Birkenhead), Heritage House (Bermuda) and the Fel Gallery (Singapore). Martin was also awarded the sponsors prize in the Discerning Eye Exhibition run annually at the Mall Galleries in London.

OMD reformed in 2007 with the original line-up and since then Martin has toured extensively, performing live in the USA, Europe and, of course, the UK.

Martin lives in Greasby, Merseyside with his wife, Alexandra Bibby, a classical musician. They have two sons.